The mass manifestation of 50.000 toy soldiers with blue hand painted helmets in public space implies that the potential of getting confronted with a heavily armed blue helmeted soldier is within reach of a global audience. Although it is obvious that the encounter is rather different from running into a real-life UN Blue Helmet, it might just trigger the same questions and feelings about their presence and deployment. Example is the paradox of armed peacemaking. The Hague (Holland) ‘International City of Peace, Justice & Security’ functions as their forward operating base from where they take off. This fits the discription as being the world’s fourth United Nations city. The open nature of the project has led to a fascinating variety of outcomes that contributed to the layered meaning. Eyewitnesses of the quest have submitted thousands of photos taken on nearly all continents. These reports were uploaded to www.minibluehelmets.com (currently offline) and archived in a brick thick book. ISBN: 978 90 90259988-7 / 560 pages / 165 x 115 x 36 mm

Joop de Boer / POP UP CITY: The beautiful book Miniscule Blue Helmets on a Massive Quest, of which only 1,000 copies are printed, also presents reflections on the project by international specialists such as Susan Manuel, Roger Stahl, Jonathan Vickery, Patrick M. Regan, Jos Morren, Linda Polman, Matt Groff, Christ Klep, and Damon Stanek. Their writings not only relate to the art project, but also to broader themes, such as the ‘real’ blue helmets known for the United Nations peace-keeping missions, and military influence in society and the entertainment industry. Susan Manuel, Chief of the Peace and Security Section of the UN Department of Public Information, concludes:
The Miniscule Blue Helmets project should reflect the aspirations and ideals of the United Nations. Miniscule Blue Helmets should not be put into situations that might misrepresent UN mandates. Many of them serve in hardship situations trying to heal conflicts that were not of their making. Each year, more than 100 may die in service. For this they should be acknowledged and thanked, even in plastic form. 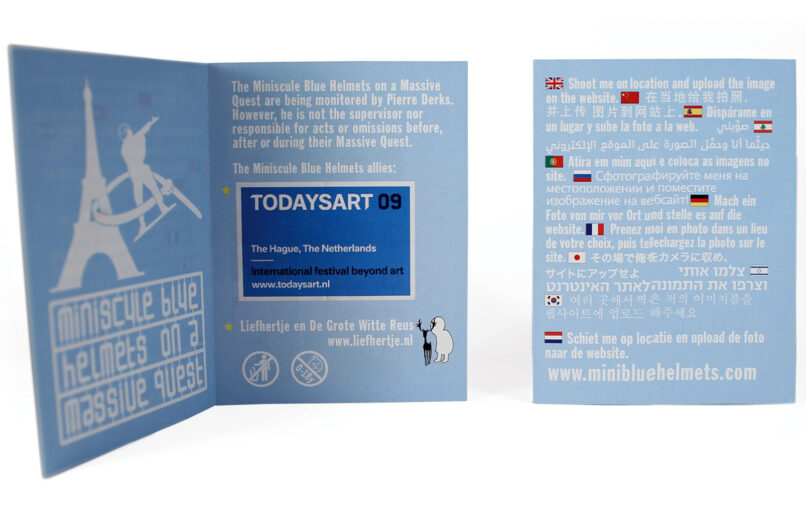 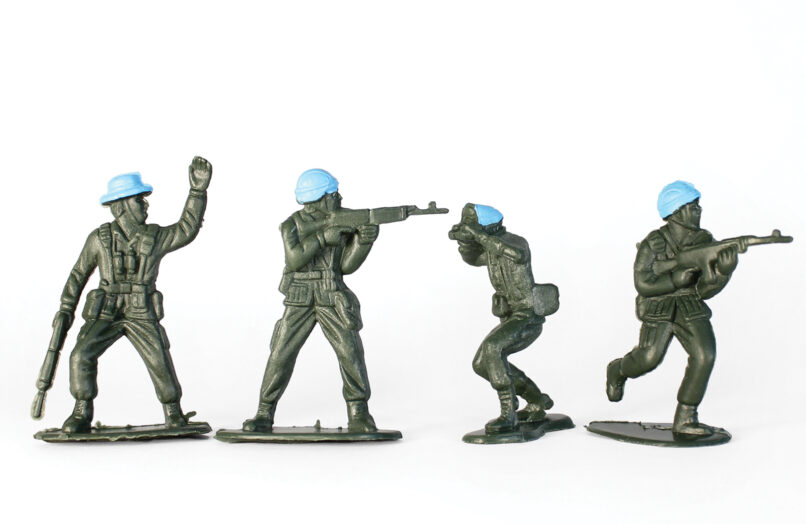 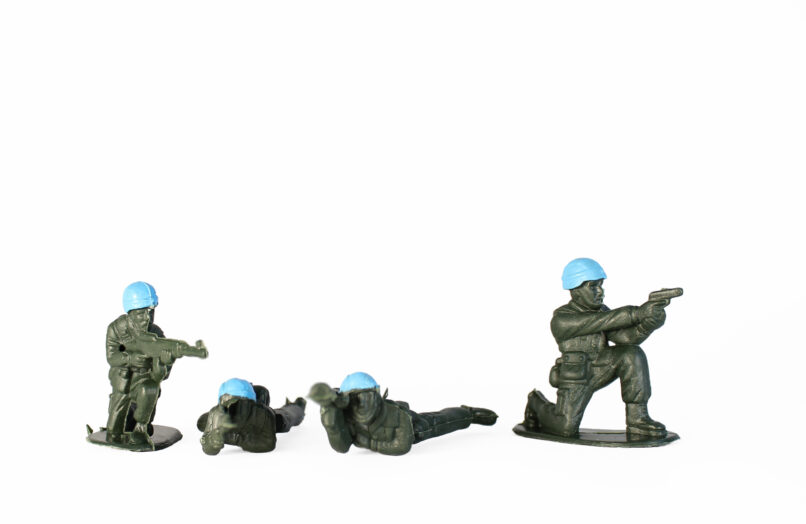 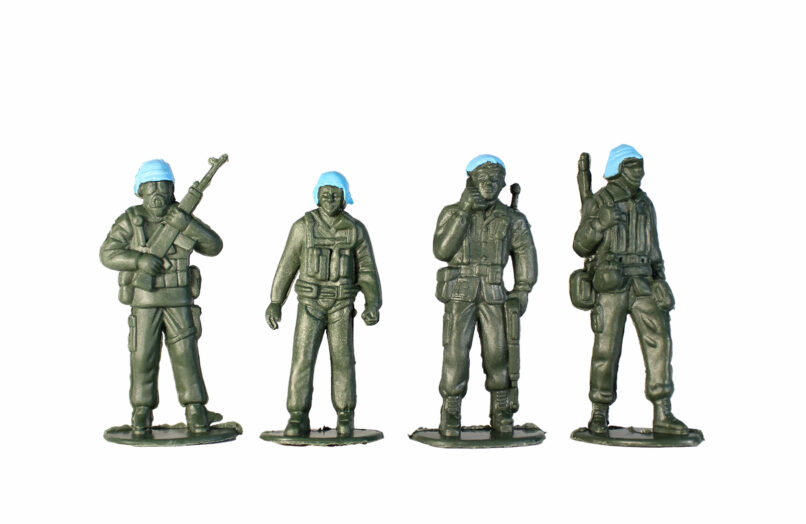 The project got adopted by a group of Dutch Blue Helmet veterans who took part in the UN mission in Lebanon in the seventies and eighties. According to Jos Morren:

Frank bought 2,000 of those little green men and painted the helmets blue himself, constantly carrying them with him and leaving them in tactical spots. (…) Eric took it more slow, but became inseparable from his one Miniscule Blue Helmet. Very handy, because if you lose touch with the world because of a psychological blockade, you just put your little buddy on the table. Very effective in such a situation. Out of the blue, those boys were suddenly given a healthy, creative form of self medication, through the art of Derks. 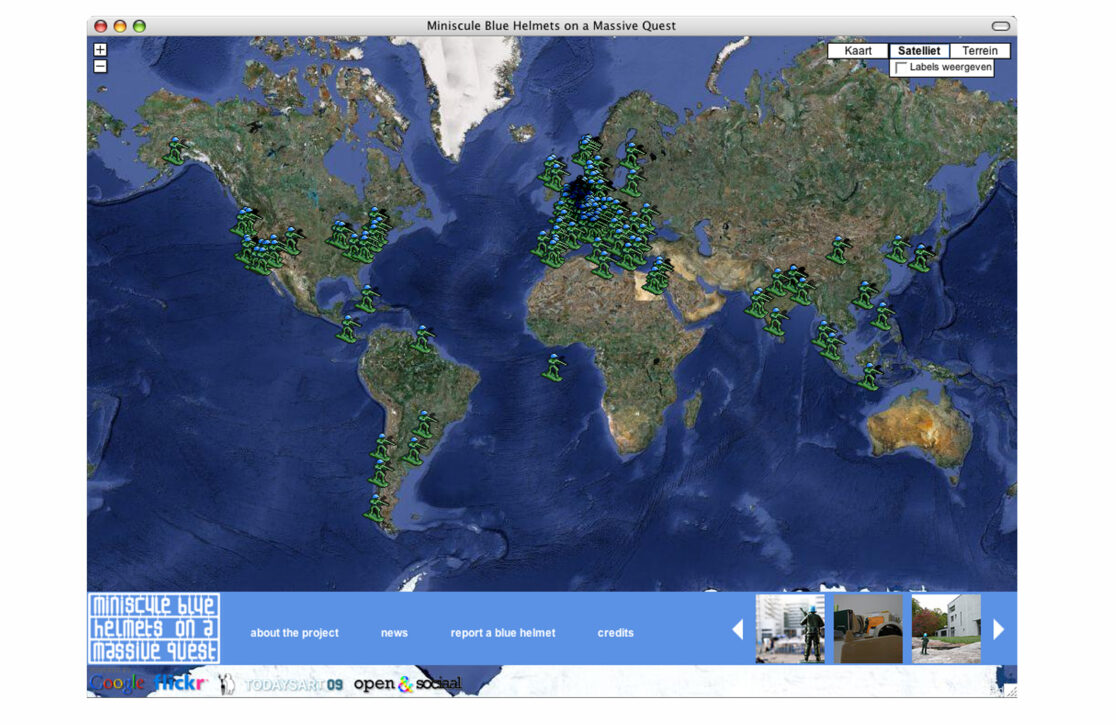 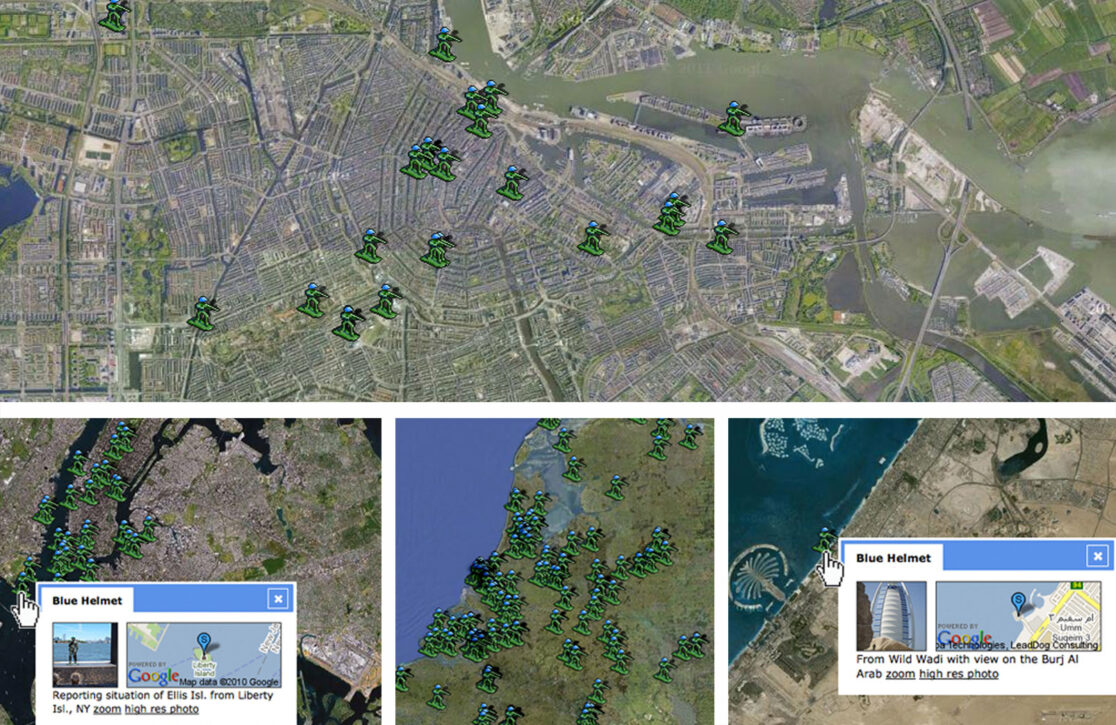 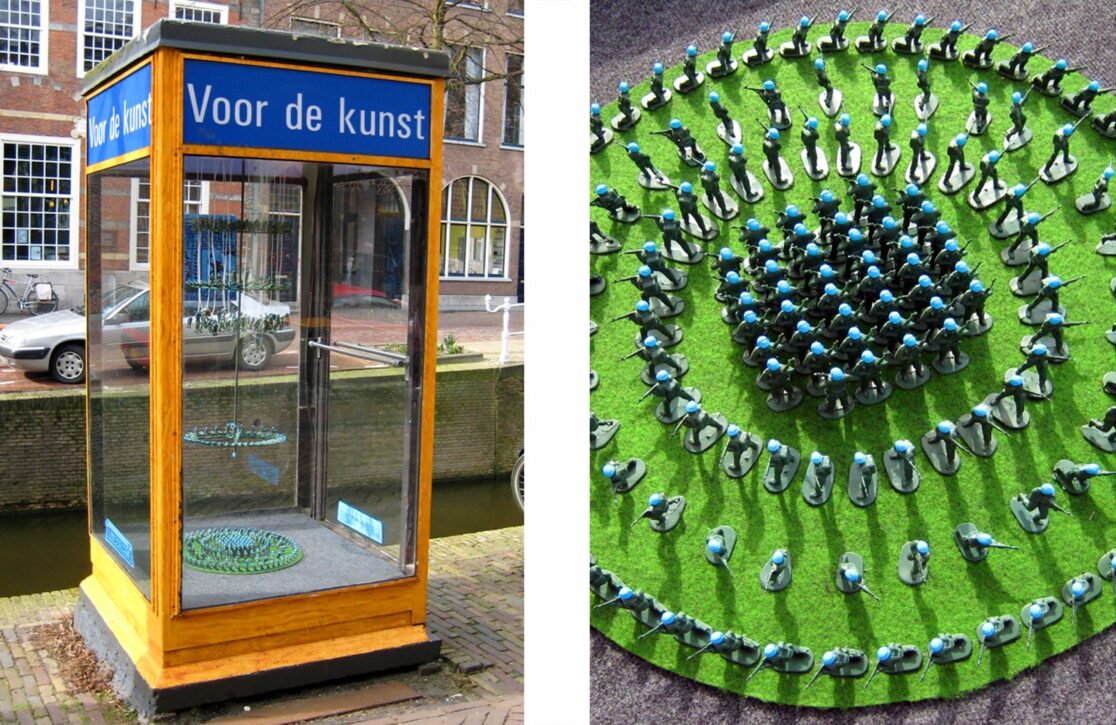 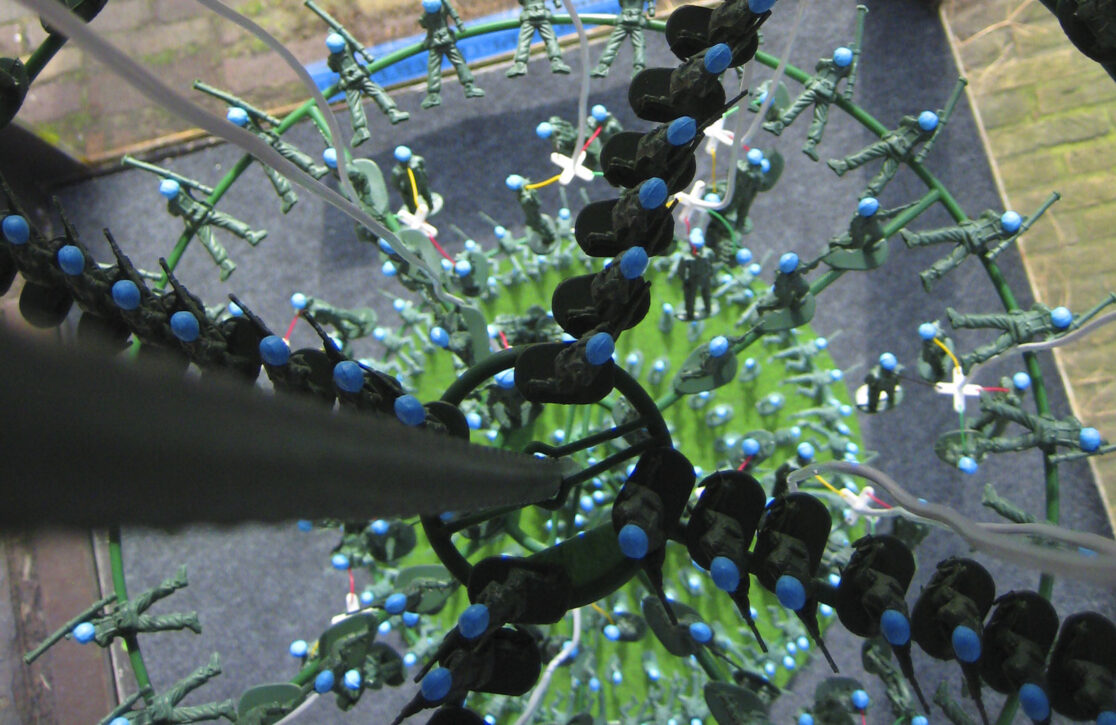 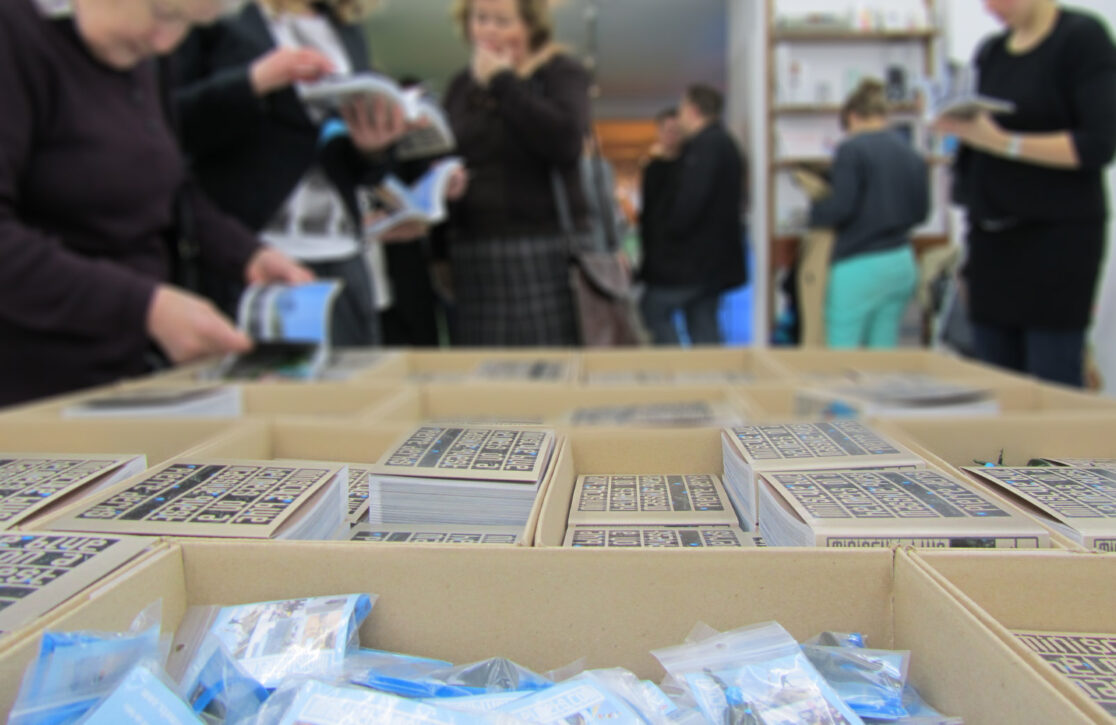 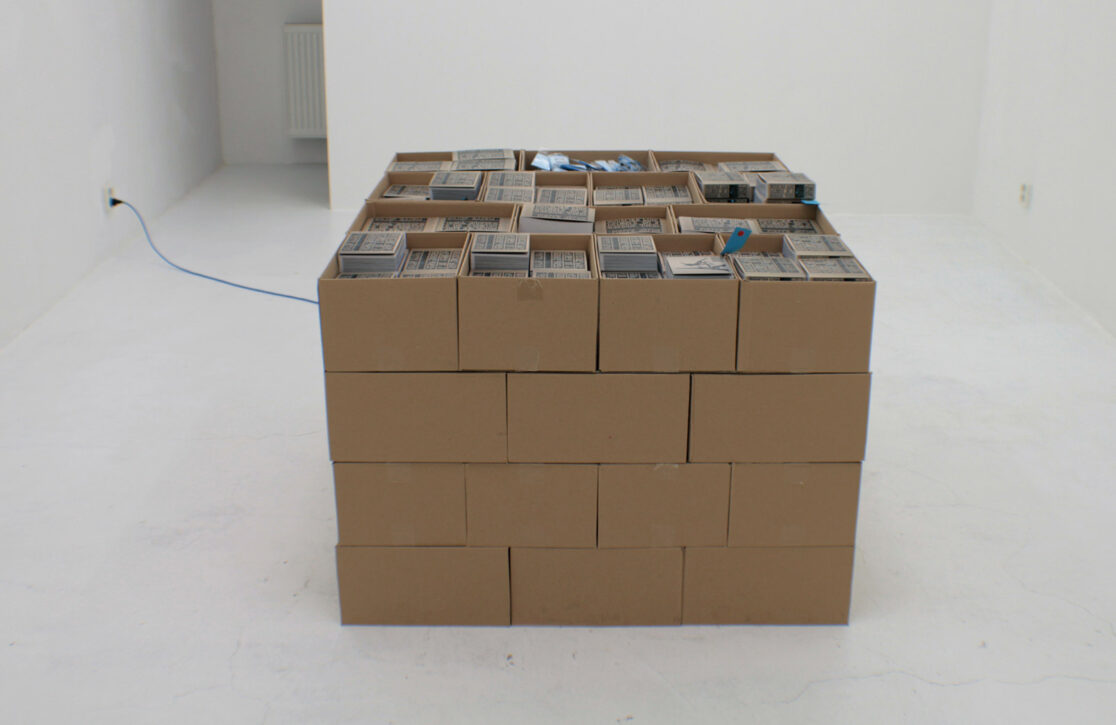 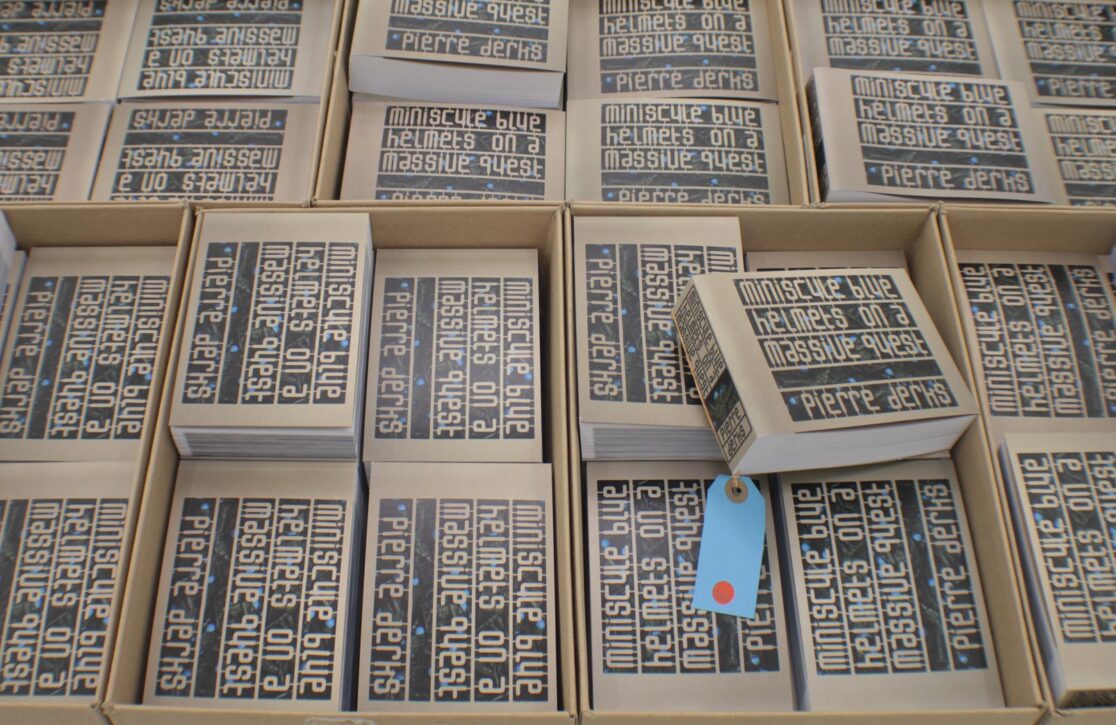 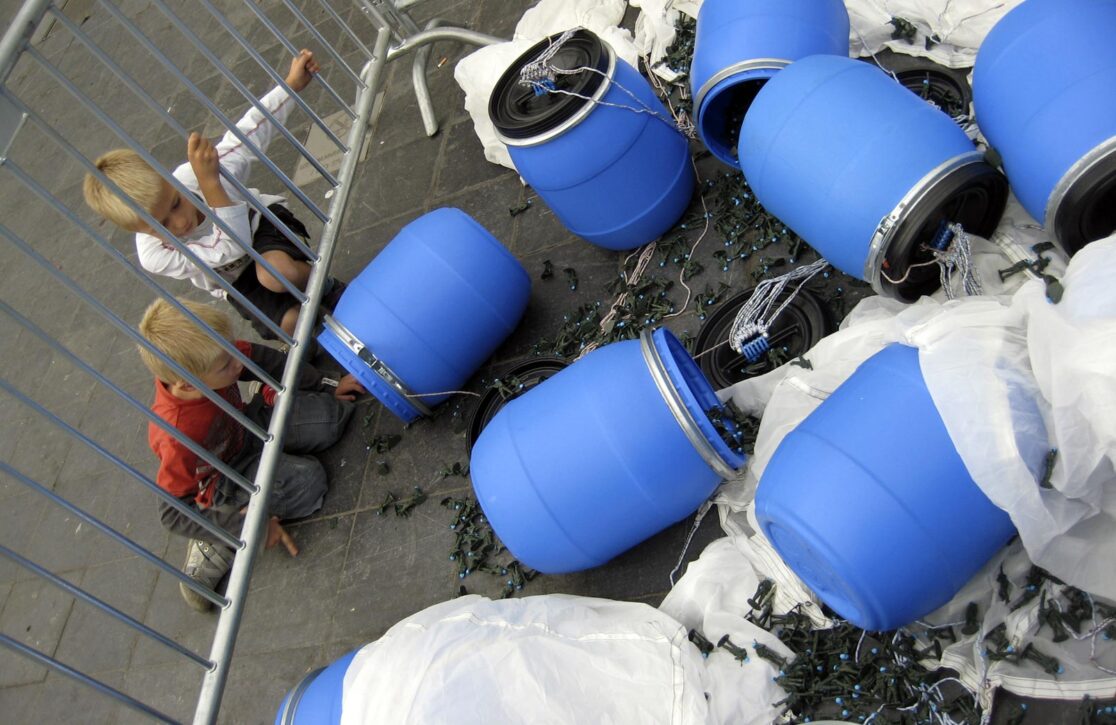 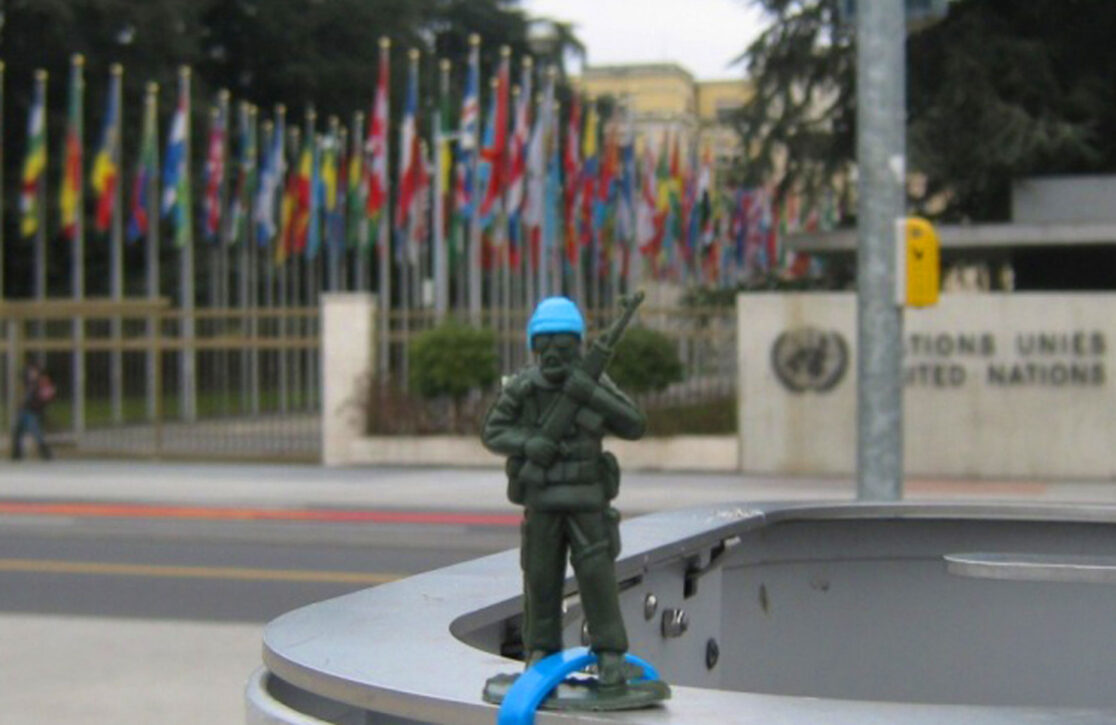 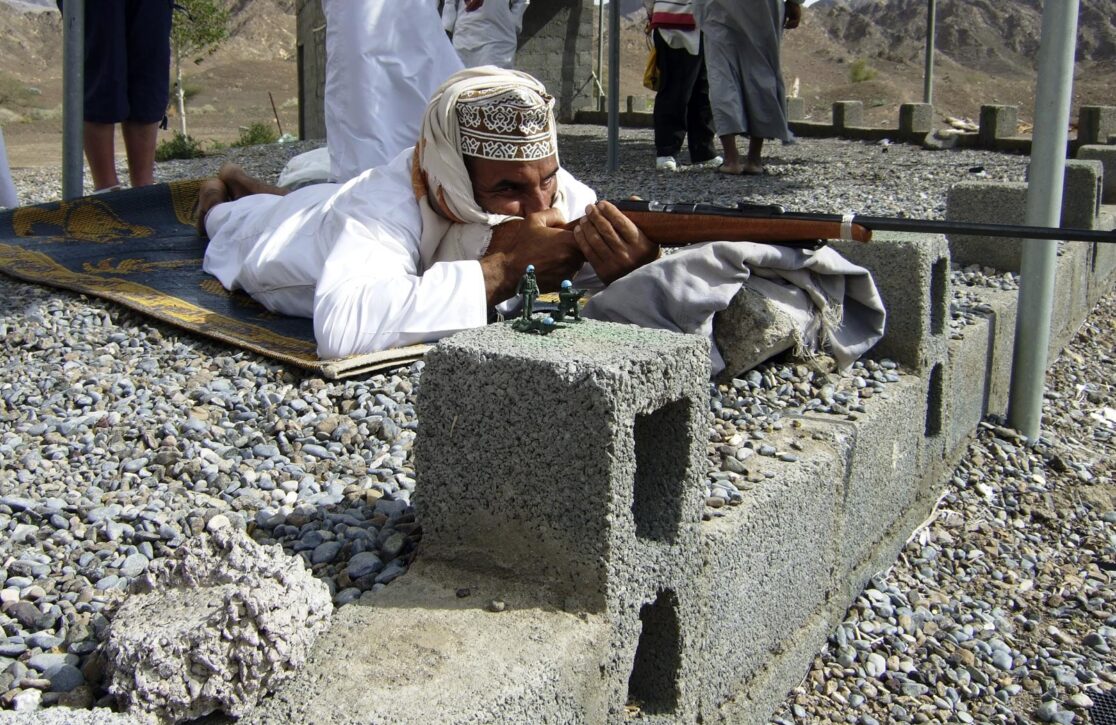 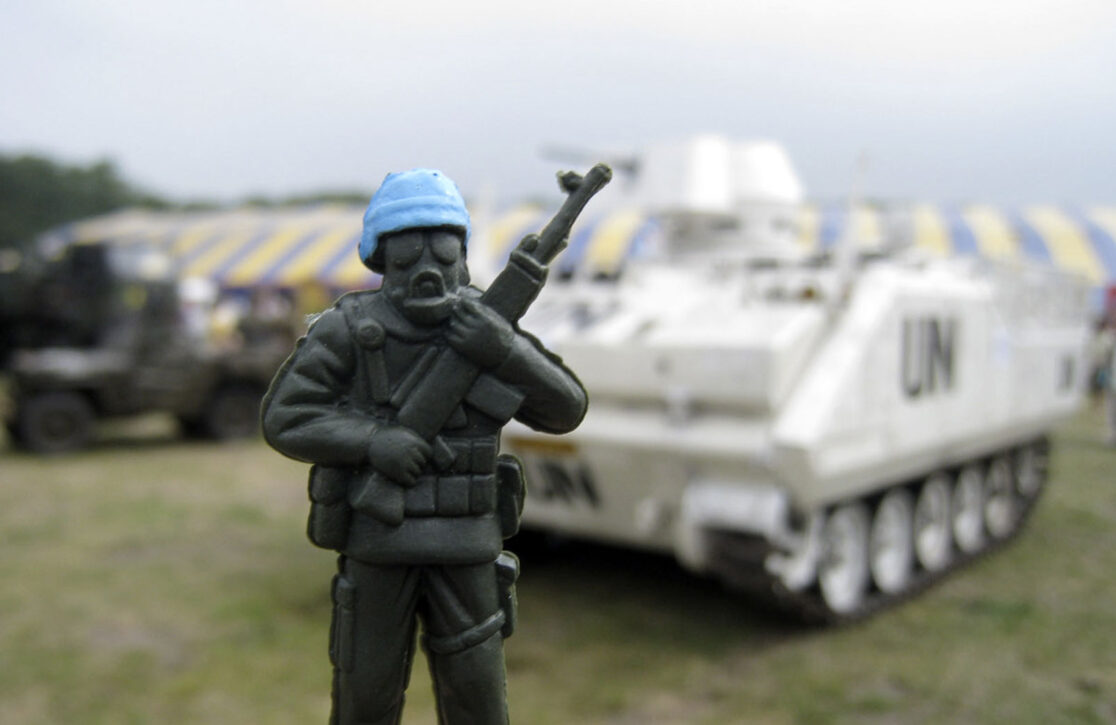 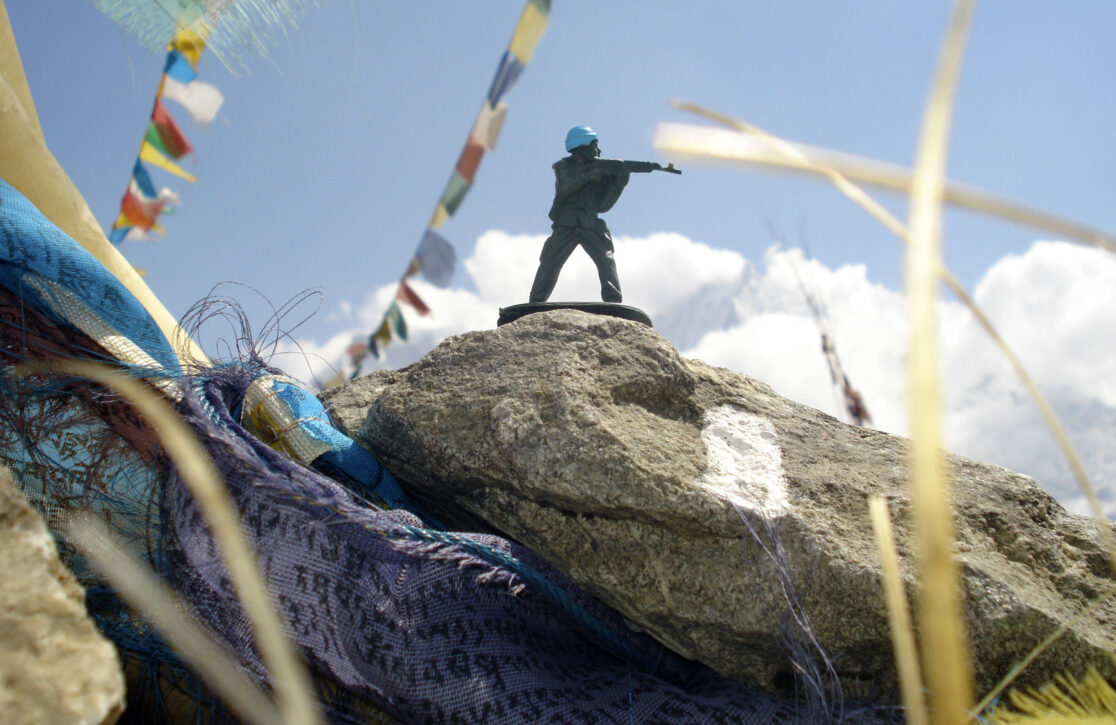 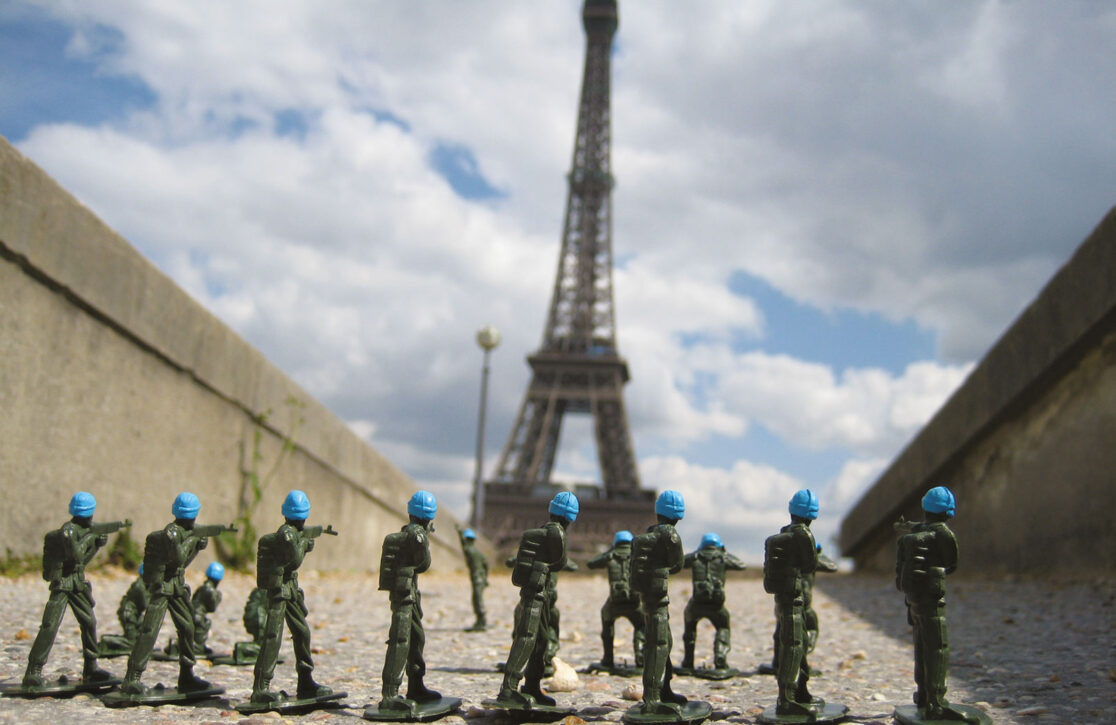 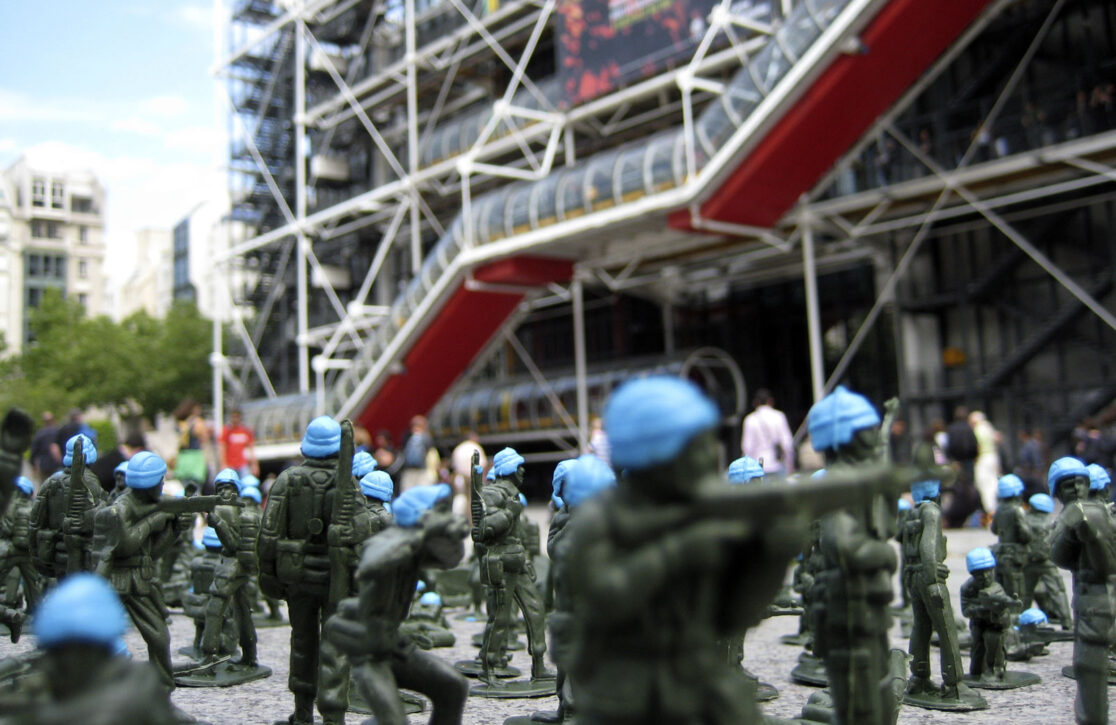